Selena Forever Favorite Things and Did you Know

The "Cholo" who said the famous "Anything for Selenas" in the Movie Selena may not have known that even after 23 years, his 3 word line would still be on heavy rotation just about every time Selena name is mentioned. 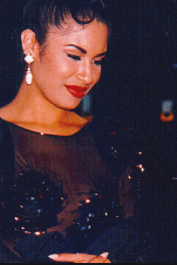 The first Tejano artist ever to win a award at the Grammys for Best Mexican American Album in 1993. Selena, who was murdered at 23 years old, would've been 49 years old this year. She was born April 16, 1971 and passed March 31, 1995 in Texas. Selena, The Queen of Cumbia, began to sing at 6 and was in a band, Los Dinos, which consist of her siblings. She started touring at 9 years old after recording her first record a year before. Her first tour bus was called, "Big Bertha".

Some of her best songs was Bidi Bidi Bom Bom (which I'm hoping Beyonce would remake), No me queda mas, Dreaming of you, El Chico del Apartamento 512, Baila esta cumbia, Como la Flor, and I could fall in love. These are songs just from the top of my head! I really love all of them. The last song she recorded, which was written by her husband, Chris Perez, was Puede Ser. It was a little rockish, more her husband style but her voice is always the same.

I know that some of her favorite things was pizza and hot tea with honey and lemon. Like many other celebrities, she would drink this before she performed.

There is a bronze Selena Statue in Corpus Christi that was revealed in 1997, two years after her death. Corpus Christi, Selenas hometown, memorial is called, "Mirador de la Flor". It's at 600 N Shoreline Blvd, Corpus Christi, TX 78401. There is also a Selena Museum in the city.

She also received the "Key of the City" in 1994 on her birthday in Houston. When she passed, President Bush recognized April 16th, as Selena Day. She also loved animals. She had a snake, python and 5 dogs.  Her famous one piece maroon color outfit (shown on doll below) that she wore to the Tejano Music Awards she was buried in. All of her stage outfits Selena Designed. Have you looked up a Selena Barbie Doll? They go for hundreds. This is why many crave dolls such as the total opposite of Selena because to get a doll that is created after Selena and Selenas is rare. I wish it was common to get a doll like Selena. That should be the new norm. 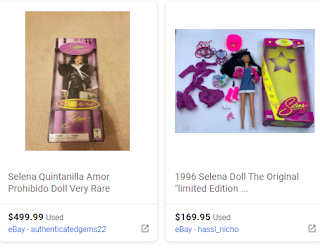 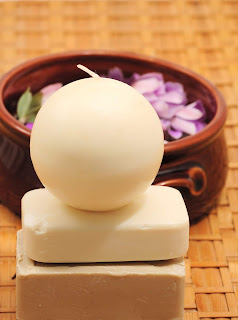 Any products that you put on your Skin absorbs to your bloodstream. Natural Skin Care is important for Melanin Skin. Products for Melanin skin must be natural, as less chemical-free as possible, and must coincide with the ecosystem. We are in the middle of January and it's never to late to recreate the products you use for your Melanin Skin. 1 in 3 people will develop cancer. We can prevent contributing to the agenda of Cancer. When you go to get Chemo, your body pretty much is deteriorating because not only bad cells but good cells are being killed off. In order for your body to live a healthy longevity, you have to be conscious of what you put in your body. This applies to your skin, hair and what you consume.

Let's start with what you put in your body. Think of your daily eating habits and what you consume on a daily basis. If you eat breakfast, lunch or dinner, you are most likely eating the flesh of an animal whether that be chicken, cattle or pig. Animals are being treated so bad in Modern farms and when you intake an abuse animal you are consuming their soul. This in return, starts to form toxic causing food poisoning.Food born illnesses is the infection of of organisms caused by bacteria. Adverse effects can last long-term even if you feel better after a few days.

When you eat green, you eat clean. Prehistorical Indigenous people ate animal, but modern society doesn't eat fresh. This society purchases their food from a grocery store where cross contamination is common. Try eating a plant based or Vegan Diet as often as possible and see the difference.
Junk food is just junk. It's acceptable and cheap so it is easily accessible. There's no vitamins or nutrient and only make you feel full because of the artificial, ingredients.

In addition to the food intake, products that we put on the skin outer layer, the largest organ of the body, absorbs into the blood stream and also a contributing factor to cancer causing cells.

There shouldn't be no products you put on without reading the ingredients. Red 1, Blue 1 or anything color and following by numbers are artificial colors, artificial fragrance and like artificial preservatives, you want to stay away. Stopping usage of these products can help keep you away from being the 1 out of 3 to develop cancer. 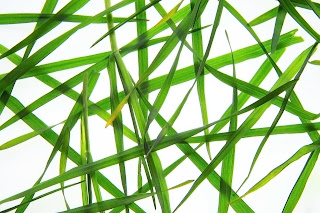 Brush your teeth with fluoride free toothpaste that is still good for anti-plaque and whitening. And if the packaging, cap and tube are recyclable and sustainable, even better.
Posted by MTC at 5:34 PM No comments:

Read what reflects you - Afro Latinas

Environmental Racism in Climate Change against People of Color


The environment and world peace includes leaving climate change out of it. Climate change affects all human kind and the wild and planet life equally. Weather affects your mood yet a bigger effect weather modification will do. Climate change will have more of a negative impact on people of color and that is because of Melanin. Generally, people of color are reference in this category due to the physical trait of melanin. People that skin complexions range from the lightest shade of brown to the richest deep hue have Melanin and hence, the more Melanin you possess, the darker the skin pigment. The global use on carbon dioxide has been proven to cause degradation to the atmosphere and the environment. The over exhaustion of the use of coal, trees and other activities caused by careless human waste has caused deforestation. As damaging as this all is, the most crucial and vital of them all that climate change affect is the Solar Energy that people of Melanin backgrounds depends on for life span and eventually, will depend on for survival. How climate change disturbs Melanin presence is when the body feels less energized and feels more Melancholy. When someone feels Melancholy, they often feel depressed, unhappy and un-energized and may very will become ill. Similar to how cars can not operate without another Melanin substance, fuel/gas, the natural body can still operate, but does not operate to its full affect when they are not receiving energy directly from Earths natural energy source. Although the weather effects everyone, the result consequence targets Melanic people because the production of more Melanin means, the dependence on Earths Natural radiation, in which is the Sun. Artificial lightening can never generate a natural Melanin body. How the body absorbs immediately to the contact with Sun can easily be observed with natural skin tanning. The sun is a necessity to Melanic groups of people because when the sun rays are shinning, the ultra violets are penetrating in the skin and ultimately, into the body most important glands that are vital to the overall functioning of the human body. The energy balance in humans change when the radiation from the sun is cloud covered by large amounts of gases that contribute to climate change. This too is caused by egotistical human activities. The demand of burning fossil fuels contracts the radiation needed by Melanin people, the earth and the earth surface like oceans and land. 50% of the suns incoming energy and is absorbed by the Earth. 100% of energy entering Planet Earth comes from the sun.
Melanin people that are in a natural environment and atmosphere will emitter energy from the sun and even after a long period later, as the Melanin further penetrate, it does things to the body scientist to this day are determined to find out what .The Earth is so naturally balanced that even in the hottest tropical region, current winds and water balances itself toward the poles to help balance out Earth heat to ice cold.
Unfortunately, more than 80% of the Artic sea ice has melted, again, due to climate change and the loss of the Artic ice means the possible lost of fresh water which supplies all water lovers around the globe. The energy balance of the climate system changes in the atmospheric abundance of the solar radiation, this affects the natural human body. The sun's radiation that is incoming to all Planet Earth, including all it's natural entities, must always go back to where it derives from, space, or black matters. If not, the Earth Energy is not balanced, man made climate change brings disarray to this structure.
The Earth temperature remains balanced only when the sun radiation is at a consistent incoming outgoing flow. When the energy balance on earth is disturbed by human activity, that affects us all, whether you believe in climate change or don't. Taking Earth natural climates and experimenting on controlling the weather through weather modification will and can have a long term affect on 95% of the world population who is Melanin dominated.
When climate patterns are altered and experimented with, not only does that cause an offset on the people but also on Planet Earth as a whole including oceans, the wildlife, the forest, trees, plant life, etc. Scientist has determined that a major part of the Suns energy is absorbed by Planet Earth atmosphere. If the quality of the air is altered, then so becomes the ambiance of the inhabitants of Earth.

Cultural appropriation, replicating the blue print while never admitting it.

Is surfing a sport? Surfing is like Basketball, it takes a certain amount of brain power capacity to become an extraordinary player in this field. In the rare sport of Surfing, nature is the opponent. Most scholars can agree this sport originated in Polynesia and Indonesia then making it's way to Hawaii.

After the arrival of missionaries, surfing was banned, although, surfing was deeply rooted in the indigenous religion. Duke Kahanamoku, the Gold Metal Olympic, was credited for bringing surfing to the modern world.
Posted by MTC at 3:33 PM No comments: 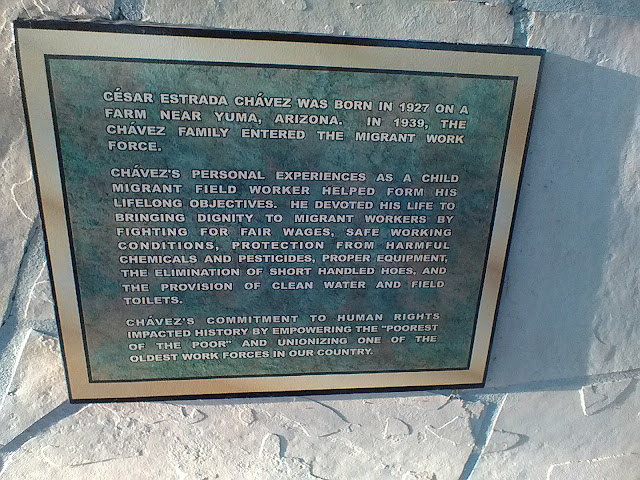 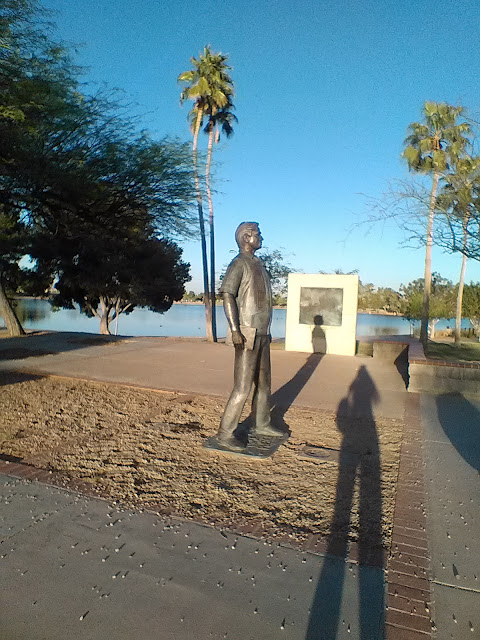 WHEN YOU THINK OF "EL MOVIMIENTO", FOR A LATINO, YOU CAN'T HELP BUT TO THINK OF CESAR CHAVEZ. IN 1962 HE FOUNDED THE NATIONAL FARM WORKERS ASSOCIATION LATER BECOMING THE UNITED FARM WORKERS UNION. HE, LIKE MLK, ALSO TAUGHT A NON-VIOLENCE RESISTANCE, BOYCOTTS AND LIKE HIS PHILOSOPHER  GHANDI, HE FASTED, SEVERAL TIMES, BEFORE A QUEST ON HIS SPIRITUAL JOURNEY TOOK PLACE. 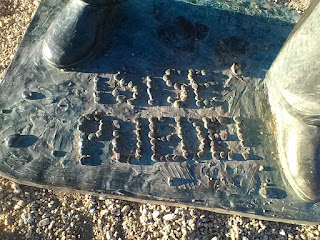 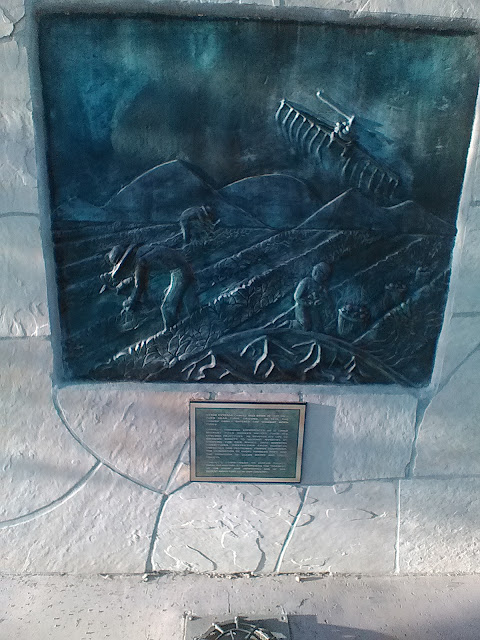 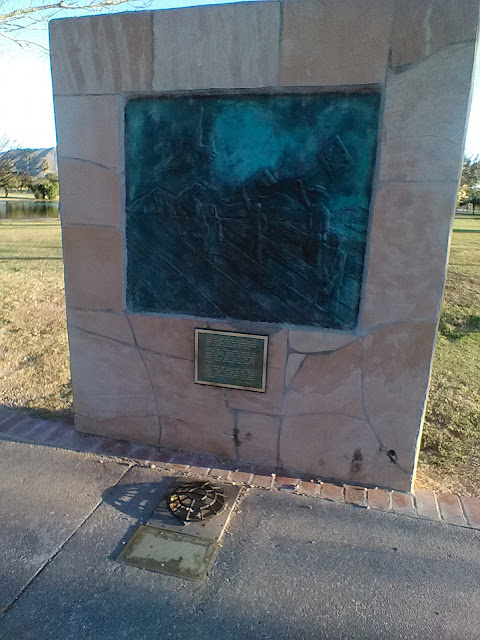 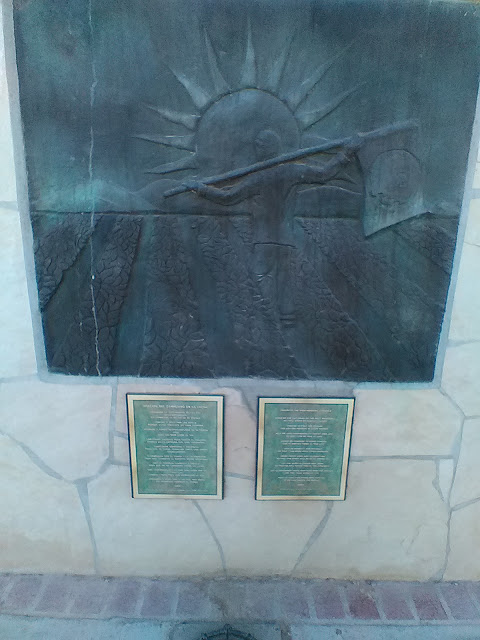 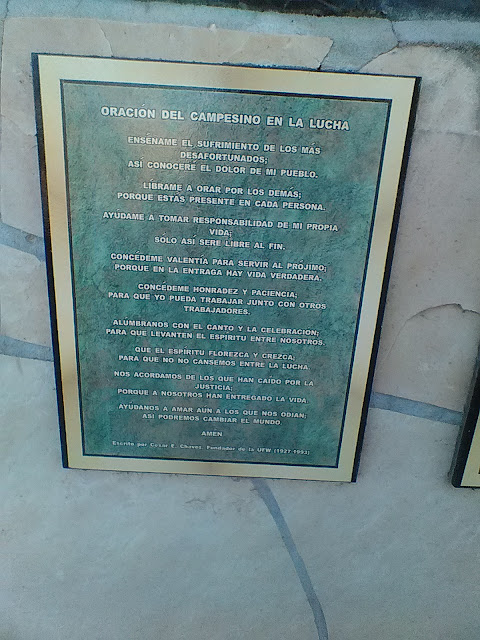 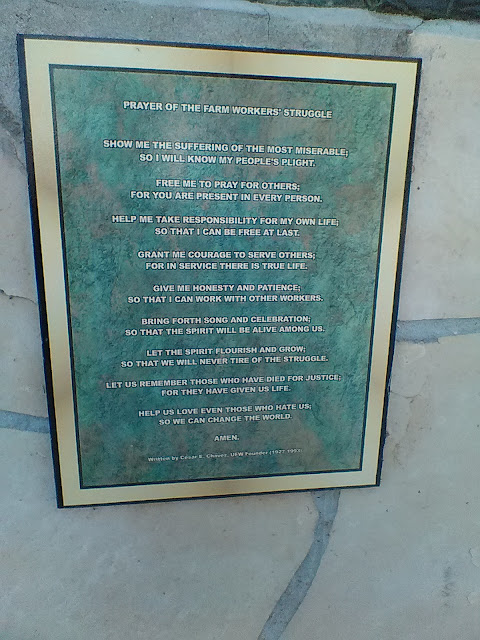 PRAYER FOR THE FARM WORKER STRUGGLE 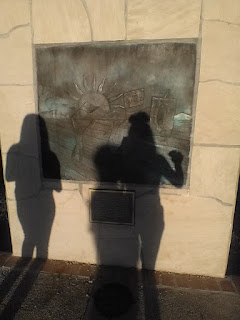 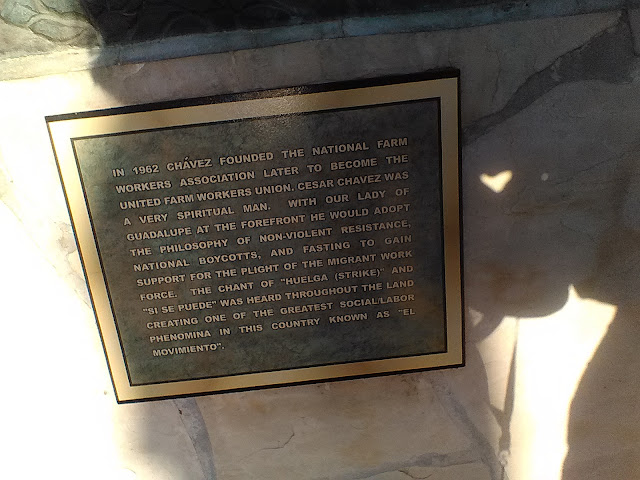 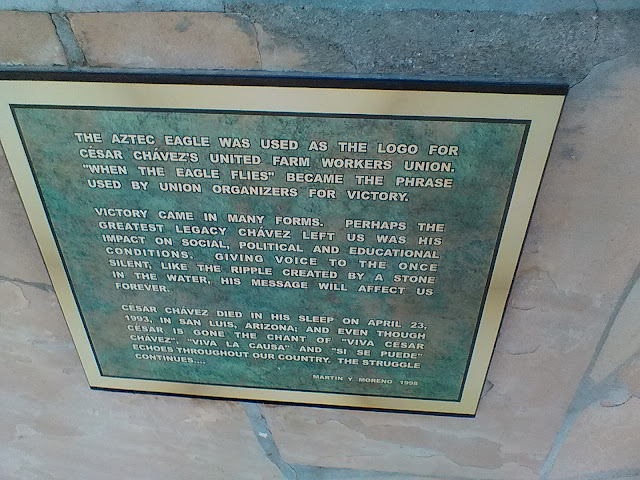 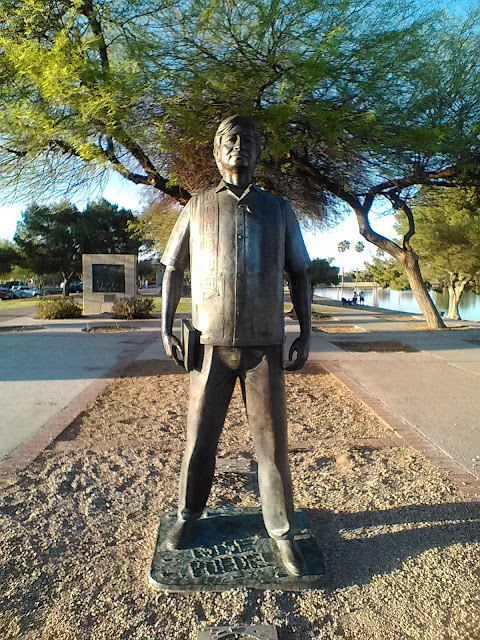 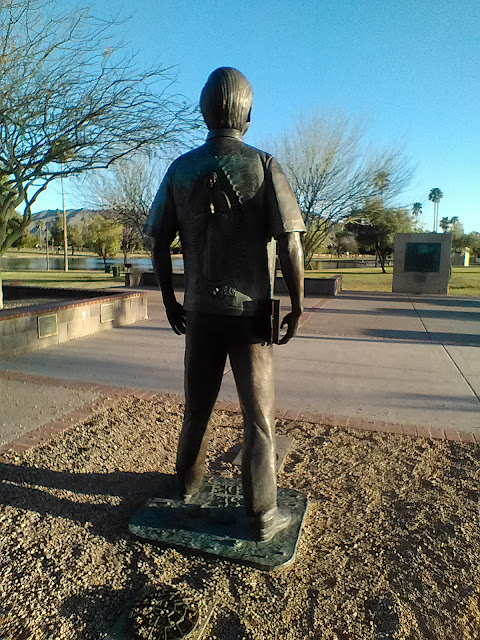